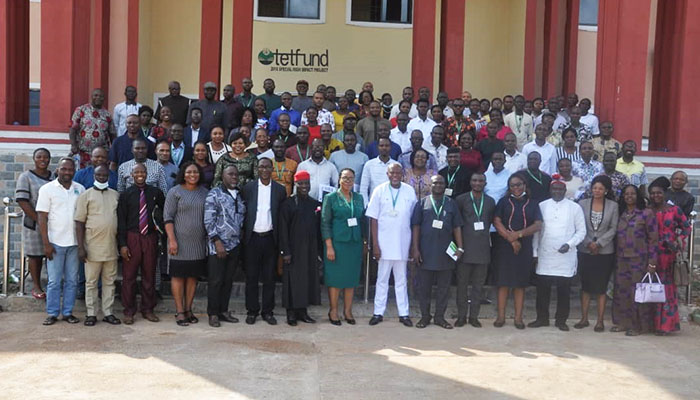 Alex Ekwueme Federal University Ndufu-Alike, Ebonyi State, has organized a one-day training retreat for principal officers, deans, directors, heads of academic and administrative departments and other appointees of the  Vice-Chancellor.

The maiden event themed “Capacity Development for Effective Governance and Administration” was geared towards enhancing the administrative capacity of the officers to enable them run with the vision, goals and objectives of the    Vice-Chancellor as contained in his inaugural address to the University community.

While delivering his opening remarks at the event, the Vice-Chancellor,Prof. Sunday Elom noted that the essence of the retreat was to foster togetherness among different offices and officers in his administration.

“We want to work seamlessly together in order to deliver on our mandate. I have observed some lapses since I assumed office in the way some officers discharge their responsibilities.”

“When you get mails, treat it promptly. Do not delay it, so that the university’s activities will keep moving without hindrances”

He further warned against the indiscriminate issuance of circulars on decisions arrived at Council and Senate meetings by unauthorized staff, noting that it is the exclusive responsibility of the Registrar of the University.

Speaking on the topic “Channels of Communication in the University”, the Registrar, Odisa C. Okeke (Mrs.) admonished staff to mind their language in official memos, urging them also to route their official communication properly.

The University Bursar, Mr. Kingsley Oyekezie, who was represented by the Deputy Bursar, Mr. Gabriel Idume espousing the topic ‘Funding Requests and Approval System in the University” harped on the need for proper retirement of advances, adding that approval must be secured from relevant authority before any money is spent, no matter the urgency or importance of the matter. He warned that staff could lose their money if they do not abide by the regulation.

The Director, Center for Human Resource Development, Prof. Fidelis Okpata in his speech titled “Structure of Decision Making and Communication in the University”, noted that a University is composed of structures and those structures are power centers where statutory  assigned functions are carried out. He also highlighted the different structures in the university and their functions.

The Director, Internationalization and Advancement, Prof. Dr. Jonny Ogunji while speaking on “Ethical Conducts in the University Administration” advised staff to work with their conscience in the discharge of their duties, and pointed out the four administrative codes of conduct to include: respect for governance, respect for others, respect for information and respect for prosperity.

The Deputy Vice-Chancellor, Academic, Prof. Dennis Akoh while discussing the “Ideals of a University Culture and Value”, maintained that the nature of knowledge and inquiry a university produces  is very important. He noted that there is a certain culture that should accompany a university staff’s character, conduct and disposition, adding that campus culture differs in universities.

Other speakers at the event include, the Dean, School of Postgraduate Studies, Prof. Chukwunonso E.C.C. Ejike who spoke on promotion requirements and Appraisal System in the University, Dean, Faculty of Physical Sciences,                 Prof. Omaka N. Omaka, who discussed the “Sanctity of University Examinations and Results and the Acting Director, ICT, Dr. Uzoma R. Alo who talked on  “Data-base Management and Result Upload.

At the end of the retreat, the training was decentralized to faculties for closer impact.