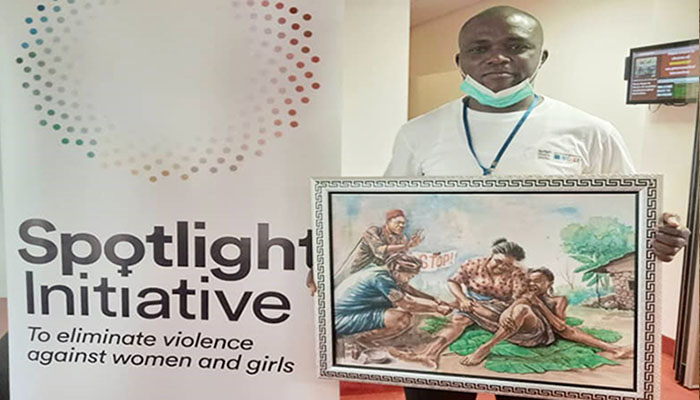 A lecturer in the Department of Fine and Applied Arts, Alex Ekwueme Federal University Ndufu-Alike, Ebonyi State, Mr. Ogbonnia Ukie, has been appointed a United Nations Ambassador on the use of arts to eliminate violence against women and girls.

Titled ‘Sheores’, the competition was aimed at raising public awareness about violence, sexual-based violence and harmful Practices against women and girls, and to support the zero-tolerance-of-violence environment promoted by the Spotlight Initiative, with a view to promoting long-term recovery and social inclusion of women and girl survivors through arts especially in a COVID-19 period that has increased and exacerbated social tension across the world.

Mr. Ukie’s artwork (painting) which depicted the social and health dangers of female genital cutting demonstrated deep visual and spiritual experience of the author on the issue of VAWG/SGBV/HP and equally inspired the audience, and therefore won the 1st prize out of 239 entries.

As a result of his rare achievement, Mr. Ukie was named the United Nations Ambassador, in the use of arts to eliminate violence against women and girls at an event held recently in Abuja.