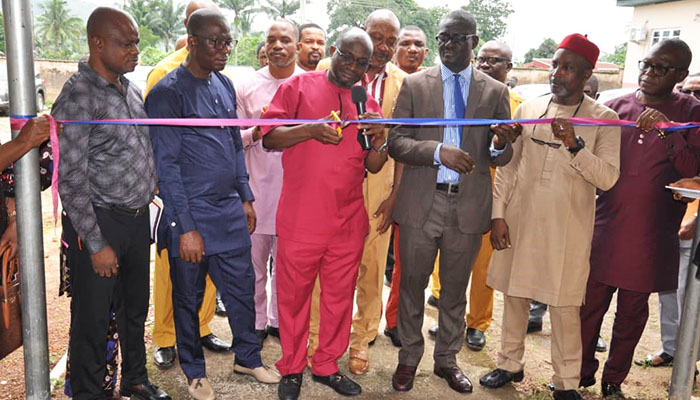 The Vice-Chancellor of Alex Ekwueme Federal University Ndufu-Alike, Ebonyi State, Prof. Sunday Elom, has inaugurated an ultra-modern community medicine outpost constructed by the Federal Government for the training of the medical students of the University and the provision of quality health services for the general public.

The facility which is located at Ebunwana in Afikpo South Local Government Area of Ebonyi State is one of the eleven of such modern health facilities situated in different parts of the country, geared towards the provision of 21st century medical education to students and an avenue for providing quality health services to the people.

Equipped with MRI, dialysis and moveable x-ray machines as well as other very important modern hospital equipment, the facility will mitigate the numerous challenges patients/end users face in accessing Medicare due to inadequacy of such vital and high caliber equipment in many hospitals across the state and beyond.

While speaking during the inauguration and handing over ceremony of the facility to the Alex Ekwueme Federal University Teaching Hospital, Abakaliki, the          Vice-Chancellor of the University, Prof. Sunday Elom who was represented by the Deputy Vice-Chancellor, Academic, Prof. Ameh Dennis Akoh noted that the community medicine outpost was for the teaching and training of medical students, and for the health benefits of humanity.

He stressed that the completion and equipping of the facility is a major milestone in the administration of the Vice-chancellor, and used the opportunity to thank the former Senator representing Ebonyi South in the National Assembly, Chief Sonni Ogbuoji for facilitating the construction of the hospital. He also thanked the Ebonyi state government for its approval for AE-FUNAi to take over the old general hospital, where the community medicine outpost was built. He further used the opportunity to call for the continued support of the Ebunuwana community to ensure the smooth take off and running of the hospital.

The Chief Medical Officer (CMD), Alex Ekwueme Federal University Teaching Hospital, Abakaliki, Dr. Emeka Onwe Ogah who was represented by the Chairman, Medical Advisory Committee (CMAC), Dr. Richard Ewa, while receiving the       handover documents, noted that the facility, when put into maximum use will attract patients from all over the country because of the quality of machines that were installed in it. He assured that they will work together with the university management and the host community to ensure seamless operation and optimum service delivery in the facility.

In his own submission, the Provost College of Medical Sciences, Prof. Paul Ezeonu called for synergy among the critical stakeholders in order to ensure efficient service delivery in the hospital, adding that with the caliber of modern equipment installed in the facility, both the medical students and the end users will benefit immensely from it. He also urged the host community to ensure peaceful coexistence between them and the staff and students of the hospital.

Speaking on behalf of the Ebunuwana Community, the President General of the Town Union, Prof. Ama Odu expressed their happiness on the completion and inauguration of the project, assuring that the community would support the management of the hospital to ensure the full optimization of the health benefits of the facility to their people. He also pleaded with the management of the hospital to carry them along in its decisions.

Earlier, the University Management had paid a courtesy call on the traditional ruler of Ebunwana, His Royal Highness, Ezeogo Sir Charles O. Azuenya, the Owu XII of Ebunwana, Edda, who promised to give the necessary cooperation and support for the effective running of the hospital.