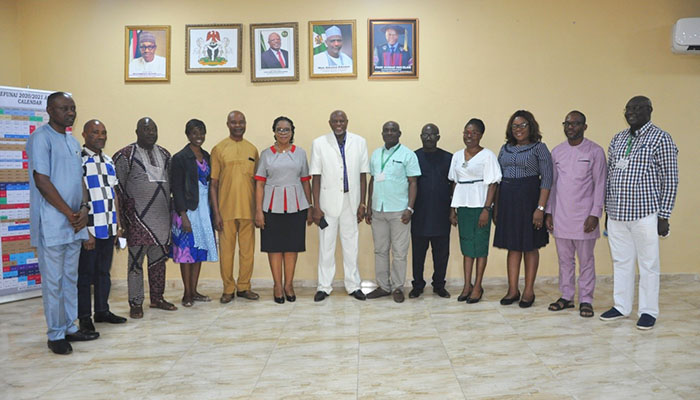 The Vice-Chancellor, Alex Ekwueme Federal University Ndufu-Alike, Ebonyi State, Prof. Sunday Elom has lauded the establishment of the Anti Corruption and Transparency Unit (ACTU) in Ministries, Departments and Agencies (MDAs) by the Independent and Corrupt Practices and Other Related Offences Commission (ICPC), promising to ensure transparency and accountability in the discharge of all his official responsibilities as Vice-Chancellor of the University.

The Vice-Chancellor made this known yesterday when members of the Anti Corruption and Transparency Unit (ACTU) of the University briefed him on the functions and activities of the Unit since they were inaugurated on 17th March, 2021 by the ICPC.

He further urged the Unit to embark on public enlightenment campaign to sensitize the University community on their functions and activities, charging them to also ensure that all staff and students discharge their official activities without infringing on any of the anti-corruption laws, in order not to smear the image of the institution.

He also assured them of his support to ensure they discharge their duties without fear or favour, adding that the Unit is critical to the success of the University.

Earlier while briefing the Vice-Chancellor on their activities, the Chairman of the Unit, Mr. Friday U. Onwumere noted that they have started working and had already carried out a system study to determine the strengths and weaknesses of the University in relation to the functions of the Unit.

“We have taken some actions which we believe might not have the force of law except the Unit meets with you and presents the document from ICPC to you, so that whatever decision or action we take, you will be aware of it”, adding “the content of the document will help the Management and the unit in rendering good service”.

Mr. Onwumere also noted that their functions as contained in their operational document are captured in Sections 7 and 70 of the ICPC Act.

He maintained that ACTU is charged with the responsibilities of carrying out all the functions of the Independent Corrupt Practices and Other Related Offences Commission (ICPC) in the institution except the prosecution of offenders.

‘’We are required to organise and sensitize staff on the issues of corruption and carry out preliminary investigation of reported cases of corruption’’, he said.

The Anti Corruption and Transparency Unit (ACTU) was inaugurated in        AE-FUNAI on March 17, 2021, by the Chairman of Independent Corrupt Practices and Other Related Offences Commission (ICPC), Professor Bolaji Owasonye. He was represented at the event by a Commissioner in the ICPC Enugu Zonal Office, Barr. Amedu Sule.

ACTU is an initiative of the ICPC, approved by the Federal Government to serve as in-house mechanism for corruption prevention in ministries, departments and agencies of government in Nigeria.