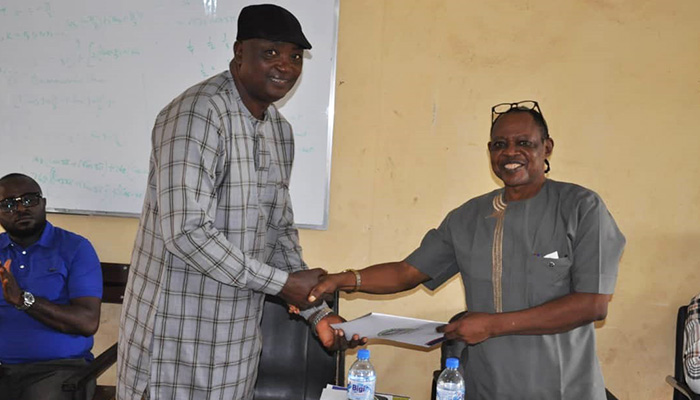 He took over from Prof. Michael Onuu, who is proceeding on a one-year sabbatical leave in the United States of America following his appointment as a visiting professor.

While speaking during a brief handover ceremony on Thursday, 30th June, 2022, Dr. Ogbaekirigwe assured of his utter commitment to the ideals of the Centre, adding that he was going to build on the solid foundations already laid by his predecessor.

He noted that though he was stepping into a big shoe, nevertheless he maintained that under his watch, the Centre would be taken to greater heights as he was acquainted with its activities having been part of it for a long time as Deputy Director.

He also used the opportunity to call for the unalloyed support of the staff of the Centre, assuring them of fairness and firmness in the discharge of his new responsibilities.

Earlier in his valedictory speech, the former Director of the Centre, Prof. Onuu thanked the Vice-Chancellor, Prof. Sunday Elom for appointing and supporting him to excel in the office, explaining that the staff of the Centre were also very supportive, which led to the numerous achievements he was able to make during his time.

He emphasized that during his tenure, the numbers of students for both the  Pre-degree and JUPEB Programmes increased proportionately in comparison to the figures he met, which in turn has helped to shore up the internally generated revenue of the University. He further stated that he was also able to revive the ICT unit to become business-oriented in order to generate revenue for the Centre by providing photocopying, typing, registration and other students’ support services.

Prof. Onuu also urged the staff to take their official duties seriously as if it is their personal business, charging them to shun fraud and flagrant stealing of government funds. He finally called on the staff to give the new Acting Director of the Centre their maximum support, noting that he will also be available for advice if it is needed.

Dr. Ogbaekirigwe’s appointment as the Acting Director, Centre for Educational Services (CES) was approved by the Vice-Chancellor on 2nd June, 2022 for a period of one year, starting from 1st July, 2022.