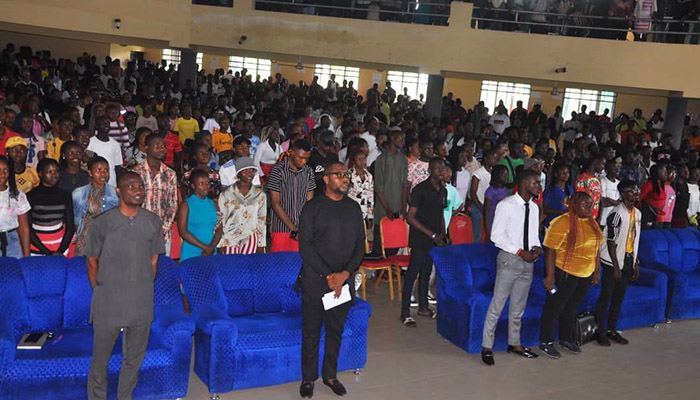 The University’s helmsman stated this recently during an orientation programme organized for the newly-admitted students of the institution for the 2021/2022 academic session, held at the Abubakar Rasheed Auditorium.

He noted that the Orientation Programme was necessary to guide them through the culture, life, background, rules and regulations of the University and its environs.

The Vice-Chancellor who was represented by the Deputy Vice-Chancellor, Administration, Prof. Abel Ezeoha, advised the freshmen to take their studies seriously, as AE-FUNAI is recognized as a serious University that graduates its students on time, adding that since 2016 the institution has consistently held its yearly convocation ceremony where graduands were issued their certificates on the same day.

He admonished the freshmen to take their studies seriously and imbibe good morals that portray the University in good light, stressing the importance of respecting and accommodating the indigenes and culture of the host community to avoid conflicts, and advised the students to shun prejudices.

He further emphasized the fact that staff of the University are highly trained and ethical in the discharge of their official responsibilities, and urged the students to feel free as the responsibilities of the staff were to make sure they succeed in the institution.

Earlier while delivering his opening remarks, the Acting Dean Students’ Affairs, Dr. Collins Irem encouraged the freshmen to always make the right decisions, as their decisions could either make or mar them in the course of their studies.

“You are now the chief architect of your own future; so you have to calm down and be focused if you don’t want to miss it”.

He urged them to attend all their classes and avoid too much fun which could make them forget the main reason for coming to the institution, which is to excel in character and learning.

Also speaking during the exercise, the Chief Security Officer of the University, ASP Nwogbu Francis (rtd.) advised students to be security conscious, adding that the security department of AE-FUNAI was established to discharge some responsibilities such as the protection of lives and property from both internal and external threats, prevention and detection of crimes, apprehension of offenders, and enforcement of rules and regulations of the University.

He pointed out that inasmuch as the security officers are around to protect lives and property of staff and students, security starts with them, and charged them to ensure they always tell their friends their whereabouts whenever they leave the University environment.

Other educative lectures such as the Use of the Library, the Role ICT in Students’ Course Registration, Proper Hostel Management, Importance of Counseling etc were also delivered to prepare the students for a successful sojourn in Alex Ekwueme Federal University Ndufu-Alike, Ebonyi State.