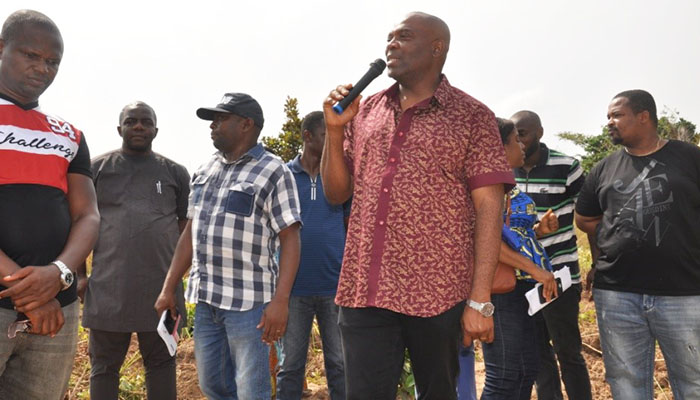 History was made in Alex Ekwueme Federal University Ndufu-Alike, Ebonyi state on Thursday 17th December, 2020, when Chairman, AE-FUNAI chapter of Senior Staff Association of Nigerian Universities (SSANU), Mr. Emmanuel Chigbata presented the site for AE-FUNAI Chapter Secretariat, first in the South East, to Prof. Chinedum Nwajiuba, VC, AE-FUNAI for the ground breaking ceremony. While speaking at the site, Mr Chigbata, said it was a special occasion and will make history in the South East zone as the first foundation for SSANU secretariat in the South East, adding that it was the first of its kind in the zone and that Prof. Nwajiuba will become the first VC to perform the function in the zone. He stated that though the union does not have the money to embark on such gigantic project, they have decided to follow the footsteps Prof. Nwajiuba, who has come to build; therefore the Union decided to build a secretariat in the university.

Prof ChinedumNwajiuba remarked that AE-FUNAI is a great University and staff of AE-FUNAI has so far cooperated with him to build the institution and that SSANU in AE-FUNAI is an enlightened Union and has earned his respect. He encouraged the Union to keep the flag flying.

Mrs Clementine Uzoije, Head of Payroll Unit laid the foundation on behalf of VC, while Mrs Nnenna Ugwuocha, Estate Manager in the Directorate of Physical Planning, Works and Services, gave vote of thanks, congratulating Prof Nwajiuba for a job well done even as he is leaving in few months assuring that his strides will be emulated.