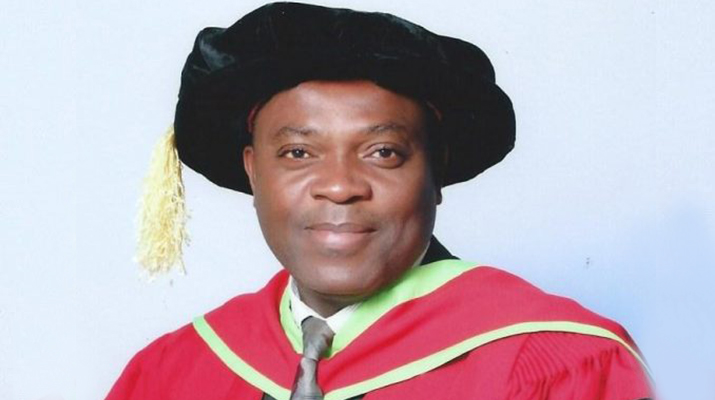 Chinedum Nwajiuba, Professor of Agricultural Economics since  October 2004, is the Vice-Chancellor of the Federal University Ndufu-Alike, Ikwo, Ebonyi State, Nigeria. He started lecturing in the Nigerian University system at the Michael Okpara University of Agriculture Umudike in the 1995/1996 session. He has been Dean of the School of Postgraduate Studies at the Imo State University since the 2011/2012 session.

Prof. Nwajiuba is cerebral academic and consummate professional that has contributed immensely to the expansion of frontiers of knowledge through his numerous publications. He has published over 160 articles and papers as conference and conference proceedings and in international and local high impact factor journals as well as books and book chapters.

He has held many administrative positions as a member of the academia:

i) Acted for the Vice-Chancellor briefly in 2012.

He served as Executive Director of the Nigerian Environmental Study Action Team (NEST) Ibadan (Part-Time). He also was Project Coordinator of the Building Nigeria’s Response to Climate Change (BNRCC), a CIDA funded initiative collaborating with the Special Climate Change Unit (SCCU) of the Federal Ministry of Environment, Nigeria, in developing a National Adaptation Strategy and Plan of Action (NASPA) on Climate Change in Nigeria. He has been on the Federal Government Team of Negotiators to the UNFCCC Conference of Parties. His recent works include Assessment of the State of Green Economy in Nigeria funded by the German International Development Agency (GIZ), the New Green Deal on Agriculture for Nigeria sponsored by the Heinrich Boell Foundation, as well as the Status of Climate Smart Agriculture for Nigeria, Cameroun and Democratic Republic of Congo sponsored by the Forum for Agricultural Research in Africa (FARA), Ghana. He was a delegate to the 2014 National Conference. He has also served as a Member of the Board of the National Agricultural Seeds Council, a Federal Government Parastatal.

Prof. Nwajiuba is happily married to Dr. (Mrs,) Chinyere Nwajiuba and the marriage is blessed with children.