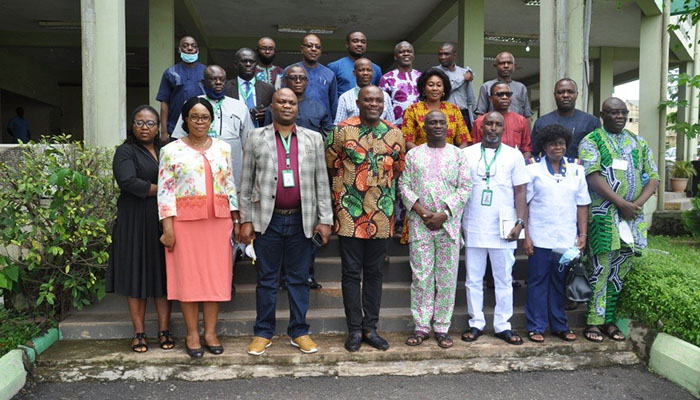 Thursday, September 10,2020  marked yet another step forward in the collaboration between Alex Ekwueme Federal University Ndufu – Alike (AE-FUNAI) and now Alex Ekwueme Federal University Teaching Hospital Abakaliki (AEFUTHA), when the Vice- Chancellor, Prof Chinedum Nwajiuba, in the presence of members of the University Management, Council and Senate, officially handed over AE-FUNAI Medical Outstation, Ebunwanna, Afikpo South LGA, Ebonyi State, to the Chief Medical Director, Dr.  Onwe Emeka Ogah, accompanied by members of Management of AE-FUTHA, at the University Senate Chamber. Recall that the working relationship between the two institutions was fully consummated on Monday, August 17, 2020, when the MoU was endorsed.

The epoch making event commenced with invitation of Almighty God to take pre-eminence in the day’s event, in the prayer led by Dr. Albi-Oparaocha of College of Medical Sciences, AE-FUNAI, after which introductions of AEFUTHA and AE-FUNAI teams present at the event were done by CMD, Dr. Ogah and VC, Prof Nwajiuba, starting with AEFUTHA, the guests.

Provost, College of Medical Sciences, AE-FUNAI, Prof Paul Ezeonu proceeded to establish reason for the gathering as requested by VC, highlighting that the essence of the meeting was to observe the administrative protocols for the official handing over of AE-FUNAI Medical Outstation located at Ebunwanna, Ebonyi State, to AEFUTHA, for proper use, in the training of the University Medical Students. Prof Ezeonu recalled that the Health Centre was ceded to AE-FUNAI by Ebonyi State Government in 2017, as authorized by HE Engr. Dave Umahi, Executive Governor, from where the able VC, Prof Nwajiuba took up the renovation of the centre, entrenched it in the university budget, taking  it to enviable standard thereby attracting the support and backing of Senator Sonny Ogbuorji representing Ebonyi South in the red chambers, who facilitated the development of the medical centre to its present status of a fully equipped modern health centre and teaching hospital with state-of- the- art facilities. He reiterated that the medical facility is second to none  in this part of the country and stands out as a fully equipped teaching hospital for the training of university students, and following the already existing marriage between the two institutions, the meeting is organized to officially hand over the facility to AEFUTHA to put to full use.

At this juncture, Architect Dr. Iheanacho Ezeocha, Director, Physical Planning, Works & Services (PPW & S), AE-FUNAI, presented list of the equipment and facilities available at the center, which include clinic building, surgery theatres, dialysis machines, wards, quarters for Doctors, Nurses and students, beds and a host of other medical support facilities.

VC, Prof. Nwajiuba, then read the contents of the official handing over document to the hearing of every person present, pronouncing that AEFUTHA would take over the AE-FUNAI Medical Outstation at Ebunwanna, with immediate effect, thereafter copies of the document was signed and countersigned by VC, CMD and other signatories, then the handing over was completed.

Prof Nwajiuba did not hesitate to express his confidence and trust in CMD, DR Ogah, who he said has all it takes to take charge of the Medical Outstation entrusted in his care to operate and use for the effective training of university medical students.

In his acknowledgment speech, CMD, Dr. Ogah, on behalf of Federal Ministry of Health, Board and Management of AEFUTHA, appreciated Prof Nwajiuba and his team, including Provosts, College of Medicine, Prof Ezeonu, Registrar, Mrs. Odisa Okeke, Prof. Ejike, and other Principal Officers for making the mutual relationship between the two Institutions possible, and for his (Nwajiuba) proactive decisions and actions in achieving the upgrading of the medical outstation to a teaching hospital of high rating and of course the historic handing over. He prayed God to protect him and move him to higher ground to continue in the service of God and humanity.

Dr. Ogah wished to tap from the VC’s vision, wisdom, wealth of connections and goodwill, to handle the responsibilities of managing the teaching hospital and existing working relationship successfully and wished that even as he is leaving soon, to always remember the legacies he left behind in AE-FUNAI and AEFUTHA. He reminded VC that he promised to extend the 24hrs uninterrupted solar power supply that the University is enjoying, to AEFUTHA, asserting that AEFUTHA has enough consultants to provide services and partnership with other hospital in Ebonyi state to maximize the potentials of more than Two Hundred (200) consultants in the Institution.

Consequently, Prof. Nwajiuba requested the University Bursar to factor the Solar project for AEFUTHA and the Medical Outstation in the 2021 budget, as the 2020 University budget has already been concluded and sent out to the appropriate authorities.

At the end, VC requested a member of AEFUTHA team to offer prayers for Sen. Ogbuorji and his family, for his support in making the facility possible, asking GOD to replenish him, guide, protect and continue to use him to better lives of the generality his people.